By Buck B. Endemann and  Kristen A. Berry

Just as Prometheus hid fire in a fennel stalk to gift it to the unaware ancients, the pioneers of energy storage technology seek to harness and store energy in increasingly novel ways. Transforming captured energy into storable and consumable power stands at the forefront of this century’s revolution in green energy technology. In 2017, the United States deployed 431 MWh of energy storage capability, largely spurred by state-specific energy storage mandates.[1] California’s state legislature has continued to lead the nation and spread Prometheus’s “secret spring of fire.”

While the concept of storing energy is centuries-old, new battery technologies promise to mitigate California’s infamous duck curve and provide the low carbon, flexible ramping resources necessary to accommodate the state’s increasing penetration of solar power. The Union of Concerned Scientists estimates the United States’ total current storage capacity at 23 gigawatts (GW), which approximates the capacity of 28 coal plants.[2] Ninety-six percent of this capacity, however, derives from pumped hydroelectric storage, most of which was built in the 1960s and 1970s and is increasingly vulnerable to drought and other environmental risks. More recently, energy storage developers have focused their efforts on battery technologies, with lithium-ion batteries in particular making great strides in terms of duration and cost-effectiveness. Market watchers have projected that by 2020 the price of battery storage could decline to $200 kWh, compared to today’s market price of approximately $340/kWh.[3]

SCE proposes to procure a total of 60 MW of energy storage by 2018 in two separate procurements of 20 MW and 40 MW.  The 20 MW of procurement would respond to an additional legislative directive, SB 801, under which SCE is required to deploy energy storage in response to the natural gas shortages caused by the Aliso Canyon gas storage facility’s well failure.  For the remaining 40 MW, SCE plans to launch programs and investments to solicit utility-owned storage, as mandated under AB 2868. SCE’s procurement plan also seeks CPUC approval to allocate $9.8 million to install energy storage at low-income, multi-family dwellings.

PG&E’s procurement plan focuses on the 166 MW of energy storage under AB 2514 that it is required to procure in the 2018-2019 procurement period.  To meet that target, PG&E proposes an energy storage request-for-offers framework. To achieve its AB 2868 target, PG&E outlined its four categories of distribution-connected storage investments: (1) researching the role of distributed energy storage in wildfire safety, particularly within the context of the North Bay Wildfire rebuilding efforts, (2) launching a behind-the-meter storage program for up to 5 MW of thermal storage, (3) identifying and seeking immediate CPUC approval (via a Tier 3 advice letter) for storage investments up to 166 MW, and (4) requesting authorization for additional investments beyond the categories identified in the 2018 application.

SDG&E’s filing proposes seven utility-owned micro-grid projects, all of which would exist at the distribution circuit level. These projects would provide services to entities that contribute to public safety, like police stations and firehouses, by providing storage capabilities separate from the main grid.  SDG&E argues that these distributed storage systems will provide a wide-range of benefits, including grid resiliency, wholesale market revenues, and reduced dependency on non-renewable energy sources by minimizing the need for back-up generators.  SDG&E also plans to contribute $2 million toward a pilot energy storage incentive program for non-profit facilities, such as nursing homes.

Each of these utilities will roll out its initiatives over the remainder of 2018 and beyond.  K&L Gates will continue to monitor energy storage developments and provide updates.

As a courtesy to our clients and friends, the K&L Gates Power practice has updated the popular resource for you – the Energy Storage Handbook.

Designed as a basic primer on what energy storage is, how it is regulated and what sorts of issues are encountered when such projects are financed and developed, the Handbook is intended to highlight the most common regulatory and developmental issues faced by our clients and the industries we serve. 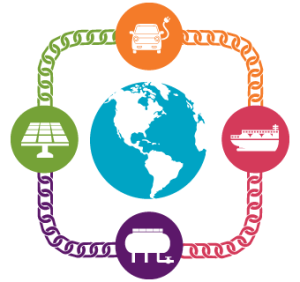 There is a lot of buzz around blockchain technology and its potential to revolutionize a wide range of industries from finance and health care to real estate and supply chain management. Reports estimate that over $4.5 billion was invested in blockchain startups in 2017 alone, and many institutions and companies are forming partnerships to explore how blockchain ledgers and smart contracts can be deployed to manage and share data, create transactional efficiencies, and reduce costs.

While virtual currencies and blockchain technology in the financial services industry have been the subject of significant debate and discussion, blockchain applications that could transform the energy industry have received comparatively less attention. Every other week, the K&L Gates’ Blockchain Energizer will highlight emerging issues or stories relating to the use of blockchain technology in the energy space. To subscribe to the Blockchain Energizer newsletter, please click here.

To view more information on theses topics in Volume 26 of the Blockchain Energizer, click here.

K&L Gates welcomes you to join us at #ESACon18.  As the ESA News Desk Host, we are excited to have the opportunity to meet with you at this renowned conference and expo.  The conference will be held on April 18-20 at the Hynes Convention Center in Boston, MA.

DISCOUNT CODE
As a member of the ESA Board of Directors, Portland Partner Bill Holmes is pleased to offer a 10% discount on registration.  Enter code BILLAC18 to receive the discount.