K&L Gates’ ReNEWS Southeast is a periodic bulletin that will track key developments in renewable energy policy, activities, and technologies that are driving the industry forward.

By Eric Niller of Wired

On June 1, 2019 the Pilgrim nuclear plant in Massachusetts will shut down, a victim of rising costs and a technology that is struggling to remain economically viable in the United States. But the electricity generated by the aging nuclear station soon will be replaced by another carbon-free source: a fleet of 84 offshore wind turbines rising nearly 650 feet above the ocean’s surface.

In this article from Wired, K&L Gates partner and Practice Group Coordinator for power David Hattery discusses how in recent years, wind turbines and their technologies have become more palatable, and therefore are more accessible, to communities. Because of this, turbines are able to generate more power than ever.

On March 27, 2019, Massachusetts’s three electric utilities submitted a draft of their second offshore wind request for proposals (“RFP”) to the state’s Department of Public Utilities (“DPU”) for review and comment. This second solicitation is a follow-up to the initial RFP under Section 83C of Massachusetts’s 2016 renewable energy mandate that directs its utilities to procure 1,600 megawatts (“MW”) of offshore wind nameplate capacity by June 2027.

The initial solicitation in 2017 resulted in the selection of the Vineyard Wind project to enter negotiations with the utilities. The utilities executed power purchase agreements (“PPAs”) totaling 800 MW of offshore wind capacity with Vineyard Wind. DPU is reviewing those PPAs currently. [1]

Some of the key bidding requirements and evaluation criteria include:

In comments on the second Section 83C solicitation, several wind developers raised concerns that a timeline that does not permit developers to demonstrate a construction start by the end of 2019 imperils the developers’ ability to qualify for the 12% federal investment tax credit (“ITC”). The production and investment tax credits are currently phasing out for wind, but wind projects that begin construction in accordance with IRS guidance in 2019 may still qualify for the credits at a reduced rate, specifically a 12% ITC or 40% of the maximum production tax credit rate applicable to electricity produced in a relevant year. Many of the commenters indicate that the 12% ITC is more valuable to their projects.

Although the utilities propose to select the winning bidder(s) before the end of 2019, the timeline in the solicitation does not suggest that the utilities and the winners will execute their PPAs and submit them for DPU approval by 2020. Any activity that the developers undertake to begin construction in 2019 based on the unapproved PPA may expose them to the risk that DPU will reject or modify the PPA after a developer has made some expenditures towards the project.

K&L Gates welcomes you to join us at the Infocast Wind Power Finance & Investment Summit.  As a Gold Sponsor for the Summit, we are excited to have the opportunity to meet with you!  The conference will be held on February 5-7 at the Omni La Costa Resort and Spa in San Diego, CA.

We look forward to seeing you!

K&L Gates is proud to sponsor the 2019 Infocast Wind Power Finance & Investment Summit. The Summit is widely recognized as the leading gathering place for wind industry deal makers. Each year, the industry’s leading developers, investors, lenders, turbine suppliers, EPCs and other players gather to gain valuable insights into industry trends, get the latest market update on the finance and investment landscape, and efficiently schedule rounds of private meetings.

Bill Holmes will serve as the Master of Ceremonies for the conference.

We are pleased to offer clients and friends a 15% discount off of registration. Please contact Lauren Hagerich at lauren.hagerich@klgates.com for more information..

We hope to see you there!

Teresa Hill will be moderating a panel on Latest Trends in PPA Terms and Structuring, and Bill Holmes will be moderating two panels, Assessing the Potential of Green Tariffs as a Renewable Sourcing Option, where attendees will assess the potential of green tariffs to provide a viable sourcing solution for renewable buyers, and Distributed Energy Solutions to Meet Corporate Goals, which will focus on on-site solar and energy storage.

Please let us know if you will be in attendance!

On December 13 and 14, 2018, the U.S. Department of the Interior’s Bureau of Ocean Energy Management (BOEM) conducted an auction for three offshore wind power parcels in Massachusetts. The auction not only broke the record [1] for number of companies bidding, but also for being the highest grossing offshore wind lease sale. The promotion of federal offshore land auctions and positive statements [2] from both the Secretary of the Interior and the acting head of BOEM suggest that the Trump Administration remains committed to developing U.S. offshore wind resources. 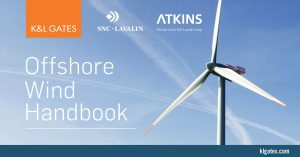 K&L Gates LLP, and Atkins, a member of the SNC-Lavalin Group recently released an Offshore Wind Market Handbook to help guide investors through technical- and regulatory issues in the emerging US offshore wind market.

“Many large companies and institutional investors who have been successful with offshore wind projects in Europe are now poised to invest in the US,” said Andrew Thompson, Director, Offshore Wind at Atkins. “However, technical and regulatory issues unique to this market can be a barrier to developers for offshore wind energy projects. Our handbook provides practical information that addresses key matters.”

Regulatory issues include a discussion of the interplay between US federal jurisdiction and the various coastal states that have enacted laws and regulations encouraging offshore wind projects. Technical issues include turbine and foundation options and solutions, performance assurance strategies and a discussion of innovations in design and equipment that are particularly suited to US coastal waters.

“Essentially, technical and regulatory legal issues are intertwined such that project success requires a closely coordinated cross-discipline team,” said David Hattery, co-leader of K&L Gates’ power practice. “Together, K&L Gates and Atkins demonstrate a pool of knowledge and a depth of experience to draw on that gives us uniquely valuable insight into the legal and technical challenges facing the US offshore wind industry.”

The K&L Gates renewable energy practice combines European project experience with US regulatory and project development expertise. Atkins is a leading provider of full range technical and operational expertise in the energy industry, including engineering design and owner’s engineer services in the global offshore wind market. Together, K&L Gates and Atkins demonstrate market leadership on key issues and can help investors build a leading position in the US offshore wind market.

Please join us on Thursday, June 7, 2018 as we host the Northwest Environmental Business Council’s (NEBC) Energy Workshop “Powering Our Future: Insight into the Growth of Renewables.”

As host of the event in our Seattle office, our partners Ankur Tohan and Alyssa Moir and associate Endre Szalay will speak on a panel titled “Solar & Wind Project Development: Navigating Risk and Seizing Opportunity.”

Join us for an engaging afternoon of discussions on policy, technology, and legal hot topics in the renewable energy industry. Panelists representing perspectives from power producers, power purchasers, energy investors, utility, and the legal industry will discuss the role of competitive markets in the renewable energy sector, the impact and increasing presence of renewables and storage on the grid, and renewable project development issues and opportunities with a focus on the Northwest.

The workshop is presented free of charge to NEBC members and all interested parties.